Lots of Tottenham Hotspur fans have taken to Twitter to voice their thoughts on the latest claim to emerge in their ongoing search for a new manager.

According to Estadio Deportivo, Spurs are looking at Sevilla manager Julen Lopetegui as a potential candidate for their vacant role.

Would Julen Lopetegui be a good appoitnment for Spurs? 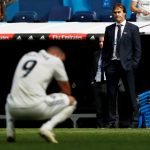 Lopetegui has been the manager of La Liga outfit Sevilla since 2019 and was able to guide the Spanish side to Europa League success in the 2019/20 campaign (via Transfermarkt).

Spurs fans flocked to a tweet from The Spurs Web relaying the claims to share their delight at the news to emerge.

“This guy’s acc really good, he’s done a great job at Sevilla, I’d have him over Fonseca”

“Would be happy with this”
@MaraDinho_10
“Really good manager. Make it happen Spurs”
@TheRyanHoll
“YESSSSS”
@mindins2005
“This would be exciting.”
@AryehLender
It was also reported earlier this week that the north London club were targeting Paulo Fonseca as their prime candidate with the expected arrival of Fabio Paratici as director of football.

The search for a new manager at the north London club continues, however, the reaction of these Spurs fans makes it clear they are pleased by the latest name to be linked with the role.

In other news: ‘Clubs are asking for him’ – Fabrizio Romano reveals interesting Spurs transfer news