Lots of Tottenham Hotspur fans have taken to Twitter to voice their thoughts at Alasdair Gold’s recent tweet regarding the vacant Spurs manager role.

Former Spurs player Jurgen Klinsmann confirmed on ESPN FC that Daniel Levy had been in contact with him over the current vacancy with the north London club.

Should Klinsmann be given a shot at Spurs? 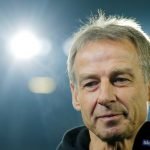 The 56-year-old has been out of management since February 2020 when he resigned from his role at Hertha Berlin after just 10 games in charge (via Transfermarkt).

Tottenham journalist Alasdair Gold tweeted out a link to an article he wrote on the former United States men’s national side manager potentially being an option for Spurs.

Fans flocked to the tweet, and it is fair to say they were left far from impressed by the possibility of Klinsmann being appointed.

@RobDauster
“Tell me your club isn’t serious without telling me your club isn’t serious”
@Corbit_THFC
“There are actually people who want him as manager?? Are they out of their mind…”
@_JoeGTHFC
“No no no! Anyone who suggests this is thinking with their heart and has rose coloured glasses on. Remember Ossie? It doesn’t always work. Great player for the club, no pedigree as a manager anywhere let alone in the Prem.”
@Adaaam75
“That’s very worrying. It looks like a relegation battle next season if he is appointed”
@THFCmgh
“Surely they can’t be serious!?!?”
@SpursCompendium
“Would rather Big Sam than Jurgen to be honest. He was a great player but that’s as far as his involvement in football should’ve gone.”
@is_closers
“I can guarantee you they are not Tottenham fans, saboteurs more like”
@thfcmitchell

Spurs have been without a permanent manager since they sacked Jose Mourinho in April, with former midfielder Ryan Mason taking over until the end of the season on an interim basis.

Going by the reaction of these Tottenham fans, the verdict from them is crystal clear, they do not want to see Klinsmann become their next permanent manager.