Many Tottenham Hotspur supporters have been discussing a news update regarding Graham Potter that emerged on social media.

The Sun journalist Alan Nixon has reported about Potter, saying that the Englishman isn’t in a hurry to leave Brighton even though he was a target for Tottenham. 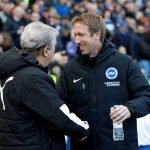 The report states that Potter would only be willing to leave Brighton if a top-four club were to approach him and the Englishman is willing to wait for that opportunity. The compensation fee required to sign him stands at a reported £15 million.

This update about the Spurs managerial target was relayed by Daily Hotspur. Many Tottenham fans made their opinion clear about this.

“Where’s he getting this confidence from.”

“Fantastic news.”
Credit: @musa_v2
“Made me smile at least.“

“Omds it just gets more and more embarrassing”

“Oh whatever. Just give us Nuno and be down with it now. Accepted we r dusted.”

These Spurs fans can’t believe this news, while others are happy that Potter doesn’t want to join their club this summer.

In the 2020/21 Premier League campaign, Brighton had the fifth-best Expected Goals difference. Only Fulham underperformed on xG more than Brighton did, which shows that Potter might be a quality manager and he might be able to do well with a better team and with better finishers.

So even though his side finished close to relegation, there is more than what meets the eye with Potter and Spurs fans should not be ruling him out.

In other news: ‘We better get him’, ‘This would be an elite signing’ – Many Spurs fans buzz as rumour emerges