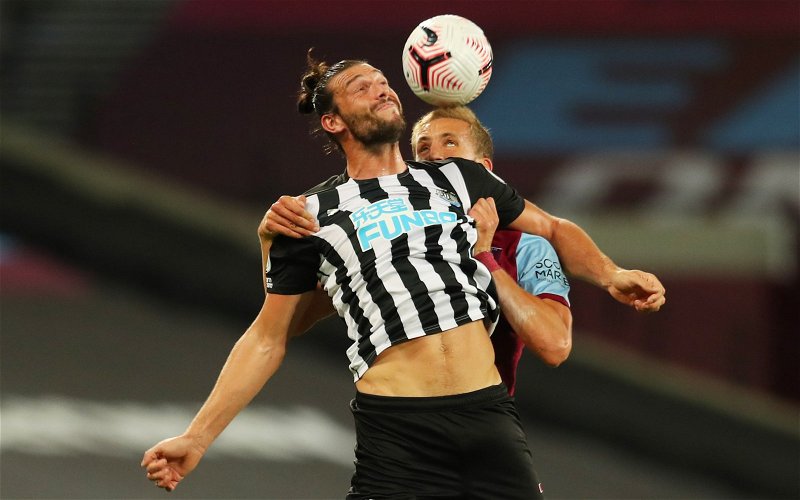 A lot of Newcastle United fans have flocked to a post from NUFC 360, which contains a link to The Chronicle’s report offering an update on Andy Carroll’s future.

They claim that the 32-year-old could stay at St. James’ Park for another season, despite appearing on the club’s released list.

Apparently, Carroll is in talks with the Toon to extend his stay on Tyneside, and this has annoyed these Toon fans.

“We’ll end up re-signing Saivet, Carroll and Atsu at this rate… it’s almost as though no one at the club has the foggiest clue what they’re doing”

“If true then there is no takeover on the horizon. And also if true this might be the nail in the coffin for a lot of fans. There’s loyalty and then there’s buffoonery. This is illogical!”

“He barely played, even when fit, neither did Gayle… what on earth goes through their heads?!”

Do you think that Carroll should be given a new contract?

Yes, he is good for squad depth

In the 2020/21 season, Carroll made 22 appearances for Newcastle and scored one goal.

However, after featuring quite regularly until January, Carroll played just 21 minutes of action from February onwards as Steve Bruce chose other options ahead of the striker.

“Not surprised. Bog standard when it comes to our recruitment team of Charnley and co.”

“Oh Jesus. He scored his goal, can we just draw a line under it?”

“Can he not just retire and we can hire him as Monty’s brother to motivate the crowd and players?”

Carroll’s return to Newcastle looked to be over when the club included him on their released list, but it looks like he may end up staying for another season, which has understandably baffled these Toon fans.

In other news: ‘So now Mike Ashley has to’ – Journalist shares Ashley takeover ‘gamble’ at Newcastle