Lots of Newcastle United fans have taken to Twitter to voice their thoughts at the latest comments to emerge from journalist John Gibson regarding midfielder Jonjo Shelvey.

In an article for The Chronicle, Gibson discussed the future of some of Newcastle’s top earners and whether the club should be looking to offload some of those individuals.

Should NUFC sell Shelvey this summer? 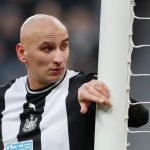 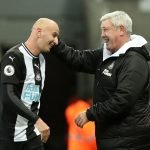 One of the players which Gibson discussed was centre-midfielder Shelvey, who is believed to be earning £70k per week.

Gibson said: “As for Shelvey, I’m afraid he is a football dinosaur. Yesterday’s man. Shuffles around the pitch rather than sprints. Relies heavily on Hollywood passes which on the law of averages often fail to come off.”

The 29-year-old made 30 appearances in the 2020/21 Premier League campaign for Steve Bruce’s side and was only able to add one goal and three assists to his name (via Transfermarkt).

Newcastle fans flocked to a tweet from The Chronicle relaying Gibson’s comments and gave their own scathing verdicts on the midfielder.

“Delighted somebody has finally called this out.”

@OfficielKaybaye
“Finally someone in the media said it.”
@nufcsean
“Been saying this all season to me mates and they just laugh”
@Geordieshaw3
“I’ve said this for two seasons. As soon as Bruce came you could see him getting slower, I’d sell him in a heartbeat.”
@victorbates
“No one can argue with that comment. Spot on.”
@PeterLiddle1
“Sell him asap”
@matthewmax

Shelvey signed for the Magpies back in 2016 from Swansea City in a deal believed to be worth in the region of £12m.

Going by the reaction of these Newcastle fans, it is apparent they too would like to see Shelvey depart this summer already losing one midfielder in Joe Willock as he returned to parent club Arsenal.

In other news: ‘Please, I beg you’, ‘Certainly hope so’ – Many Newcastle fans flock to takeover claim