Lots of Newcastle United fans have been reacting on Twitter to a post from Christian Atsu as the winger departs from the Tyneside club.

Atsu confirmed he will be leaving Newcastle at the end of the month when his contract with the Toon comes to an end.

Should Atsu have been given more game time? 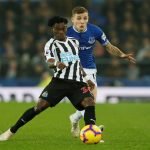 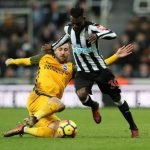 The Ghanaian winger joined the Magpies in 2017 from Chelsea in a deal which is believed to be worth in the region of £6m.

However, this season saw the 29-year-old struggle for game time having only made one senior appearance – a 10-minute cameo in the EFL Cup.

Newcastle fans flocked to the tweet from Atsu to show their gratitude for the Ghanaian’s services over the years.

What exactly did these Newcastle fans say?

“I’m not crying you are”

@charliehep16
“Great servant, shame how things turned out once we got back to the Prem”
@nufctom_
“We have lost an icon”
@ShelvatronMk2
“True professional. All the best Christian “
@NUFC_Danny
“Worst day ever”
@tom_armstrong1
“Wishing you the best for the future, Christian. You gave #NUFC great service. I hope you go on to get the move you want. Good luck!”
@harrydecosemo

Atsu racked up 121 appearances for the Magpies over the course of his time on Tyneside but was only able to add eight goals and 10 assists to his name (via Transfermarkt).

Going by the reaction of these Newcastle fans, it is clear they are sad to see Atsu leave, however, looking at his stats we do not think he will be missed for his goals return.

In other news: ‘Wow’, ‘Bargain if this is true’ – Many NUFC fans buzz over potential ‘amazing signing’