Journalist Fabrizio Romano has recently talked about Kieran Trippier’s intentions and whether he wishes to join Manchester United.

The Red Devils are interested in signing Trippier from Atletico Madrid, but it has been stated that the Spanish side want a much higher fee than what United are willing to pay. United have even had a bid rejected for the Englishman.

Romano talked about Trippier’s future when he appeared on the latest episode of the Strettycast podcast. The journalist stated that the right-back is happy at Atletico Madrid and loves living in the Spanish capital – but if he has the chance to move back to England, he’ll be happy to do so. 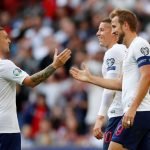 It has been stated that Atleti want a fee of £34 million to let Trippier go, but United aren’t looking to meet that asking price.

The Red Devils do have Diogo Dalot returning from his loan spell at Milan following his Euro 2020 campaign with Portugal. He could be an option at right-back for United, playing as a rotation option for Aaron Wan-Bissaka.

The ex-Porto man did well during his spell at Milan, picking up a rating of 6.72 and directly contributing to a couple of goals in Serie A last season (as per WhoScored). So if United fail to sign Trippier, using Dalot may not be a bad option.

In other news: ‘Has been told to come back’ – MEN journalist reveals U-turn for Man United outcast