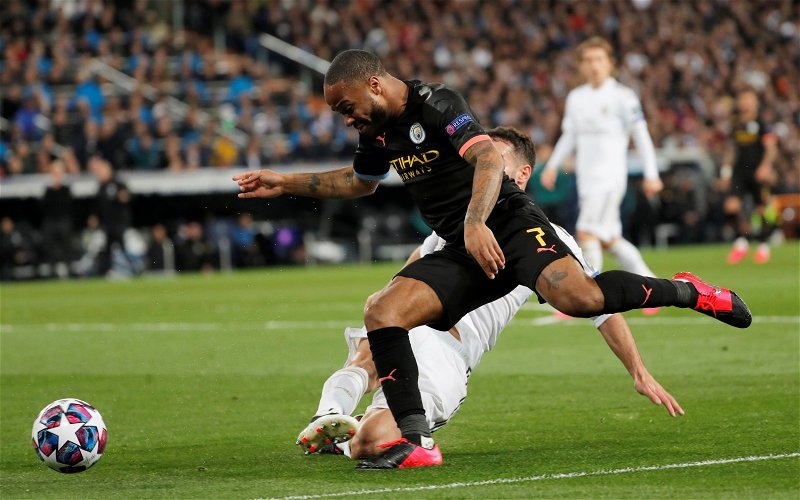 Neil Atkinson from The Anfield Wrap podcast has admitted he’d be happy to see Raheem Sterling re-join Liverpool this summer as rumours continue to speculate the future of the Manchester City winger.

Sterling, who seems to have fallen slightly out of favour at the Etihad, was dropped by manager Pep Guardiola in the final months of the season.

With Manchester City continually linked with Jack Grealish and Harry Kane, the future of many City players has been speculated, and Sterling is one of those who has been linked with a move away from Manchester, six years after he joined from Liverpool.

Financial journalist Alex Miller reported on Thursday evening that any chances of Sterling returning to Anfield had taken a massive boost after he left his agent.

Speaking on The Anfield Wrap’s YouTube channel, presenter Atkinson reacted to the rumours:

“When Raheem came through, he was the cleverest young player I can ever remember seeing, like from minute one, everyone always focused on his pace and his trickery; for me, he was so tactically switched on.

“If you were asking me about replacing Roberto Firmino with a player who has similar qualities, I would want Raheem Sterling to be really high on my list.

“I think he did so much good work through the middle of Liverpool’s pitch when he was with us – both feet, turns one way or the other, tons of pace, work rate. Honestly, if you want to get someone else who can be a Firmino-esque nine, certainly [from] the current crop of Premier League players, he’d be the one.

“I just think he’d be incredible for us, and I think he’d fit and he could play anywhere across the three.”

If Liverpool were able to strike a deal with Manchester City for Sterling, it could be a fantastic piece of business for Liverpool as they look to strengthen themselves and weaken a rival simultaneously. However, for that reason alone, it seems like it would have to take a lucrative offer for City and Guardiola to sell to a direct rival.

Sterling’s versatility could make him another fantastic addition to Jurgen Klopp’s side, as they look to buy players who are functional right across the front line, as suggested by the signing of Diogo Jota last summer.

With the African Cup of Nations coming up in early 2022, Liverpool will be without Sadio Mane and Mo Salah for an uncertain amount of time, so having someone like Sterling who could come to the fore in that period alone would be massive for Liverpool if they are to challenge for the Premier League title in the absence of their two African stars.

However, it could be deemed as a slightly controversial transfer move as the winger hasn’t always seen eye to eye with the Reds fanbase since his exit.