Liverpool podcaster Grizz Khan has been sharing his thoughts on the possibility of the Merseyside club making an attempt to sign Norwich City defender Max Aarons during the upcoming summer transfer window.

This comes after Khan made an appearance on a recent episode of LFC Daytrippers where he spoke about a range of transfers he would like to see happen at Liverpool this summer.

On the subject of Aarons, who has been mentioned with a potential move to Anfield in the past, Khan had this to say on the matter.

He said: “Max Aarons, I think is a fantastic young player who initially, wouldn’t be too fussed at being the understudy to possibly the best right-back in the world.

“He would understand the mentality, being English as well, playing in this league, know what Trent [Alexander-Arnold] has done and I think he’s a brilliant, young, attacking full-back.”

As a product of Norwich’s youth academy, Aarons made his senior debut for the club back in August 2018. Since then, the 21-year-old, who is currently valued at £18 million, has made a total of 130 appearances for the club across all competitions, in which he has managed to score five goals and provide 13 assists along the way (per Transfermarkt).

Given how Aarons managed to earn himself a decent overall season rating of 6.93/10, placing him in Norwich’s top 10 highest-rated players for the season according to WhoScored, this could be why Khan thinks Liverpool should consider adding the defender to their squad this summer.

Would you like to see Liverpool make a move for Max Aarons this summer? 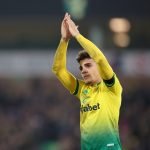 However, with German club Bayern Munich also previously reported to have an interest in Aarons, this could potentially be a stumbling block for the Reds if they do attempt to sign him this summer.

In our view, unless Aarons would be guaranteed regular playing time with Liverpool, which seems unlikely in our view because of how many games Trent Alexander-Arnold has played throughout previous campaigns, then perhaps Aarons should stay at Norwich and continue developing with them.