Almost every club in the top six of the Premier League may be looking for a striker this summer, so it is no surprise to see Dusan Vlahovic from Fiorentina getting linked with most clubs and Conor Clancy, editor in chief at Forza Italian Football, has heaped mountains of praise on the 21-year old.

Vlahovic has taken the Serie A by storm this season having found the net 21 times for a Fiorentina side that only managed to score 47 goals in the league over the entire season so for somebody so young to be carrying a team like that is outstanding. 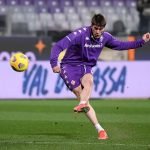 The Serbia international, who would reportedly cost €60m (£50m), has mainly been linked with a move to Liverpool and if he linked up with Mohamed Salah, Sadio Mane and Diogo Jota it would be a very terrifying prospect for the rest of the Premier League.

He has enjoyed a real breakout season in Florence this season and Vlahovic appears to just have everything that you need as a striker, so when Clancy was asked about how good the striker is, he exclusively told This is Futbol the following:

“[He’s] Incredible, and it really caught me by surprise because I’d seen him play in the flesh a few times and he scored a great goal against Inter and there was a lot of hype in Florence about him. People were saying this guy’s the real deal and I just couldn’t see it.”

After seeing him flourish this season for Fiorentina, Clancy has been able to describe what it is like watching someone like Vlahovic and what teams can expect, he added:

“He’s just a complete number nine and I know it’s just off the back of one season, but he’s strong, can link play up, can hold the ball up and most importantly, he’s scoring goals. He’s one of those players that when he looks confident, you almost expect him to score every time he plays.”

There could well be a lot of competition for someone so talented at such a young age, however, he does appear to have gone under the radar given other players at a similar age such as Jadon Sancho, Erling Haaland and Phil Foden.