Liverpool journalist Ian Doyle has been sharing some details on Reds midfielder Marko Grujic and the reported transfer interest in the player.

This comes after Doyle made an appearance on a recent video from the Liverpool Echo’s Blood Red YouTube channel where he spoke about Grujic and the reported interest in him.

On the subject, Doyle had this to say on the matter.

He said: “As you know, he’s spent the last season on loan in Portugal with Porto, where we did particularly well.

“Porto finished second in the table and they got to the quarter-finals of the Champions League, and it was playing in the European competition that Grujic has caught the eye of several teams, not least Porto themselves, who are quite keen. Initially, they were quite keen to take the player on loan, but Liverpool don’t really want to do that – they’d rather get the money in for the player.

“They value him at around the £20 million mark and it’s not just Porto that are interested now, it seems as though there are clubs from Italy and Germany.

“When Porto beat Juventus to get to the quarter-finals of the Champions League back in March, Liverpool were contacted by a number of clubs from Serie A and the Bundesliga, and for the rest of the season they’ve been keeping an eye on the player and they will retain their interest.

“In Portugal over the weekend, we’ve heard suggestions that Porto have become slightly alarmed at this situation, because they would like to take the player on a permanent deal.”

Liverpool signed Grujic back in the 2016 January transfer window from Red Star Belgrade for a fee of £5.1 million. Since then, the 25-year-old, who is currently valued at £13.5 million as per Transfermarkt, has had loan spells at clubs such as Cardiff City, Hertha Berlin and Porto, ultimately only managing to make just 16 appearances for Liverpool’s senior side along the way.

While Liverpool may favour selling Grujic this summer and pick up a suitable transfer fee for him, another option could be to keep him in the squad and finally give him a shot in the team to play on a regular basis to fill the hole left by Georginio Wijnaldum’s impending departure.

What should Liverpool do with Grujic this summer? 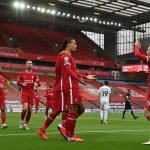 In our view, if a club offers £20 million to Liverpool to take Grujic off them on a permanent basis, this could be a good piece of business from the Reds by picking up a decent transfer fee to say goodbye to a player that hasn’t really managed to leave an impact on the team since his arrival.

In other news: ‘I’d have to decide what’s best’ – Liverpool ace reveals thoughts on Anfield future