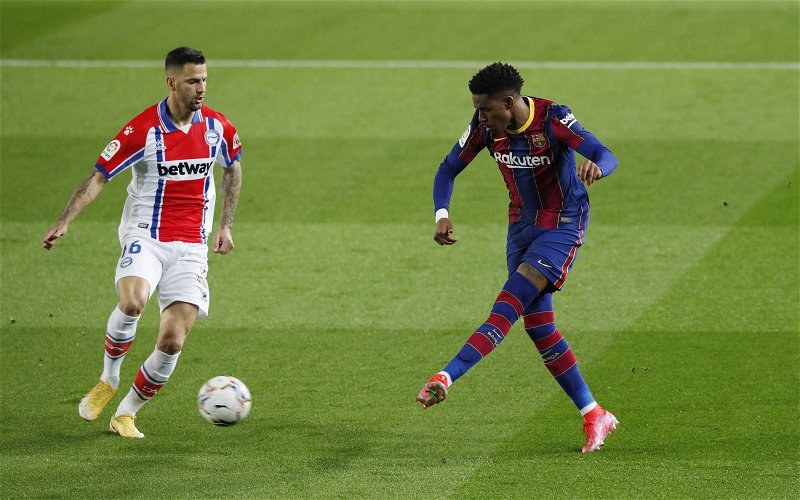 Leeds United reporter Beren Cross has provided an update on the situation surrounding the club’s pursuit of Barcelona’s Junior Firpo.

Recent reports have claimed that Marcelo Bielsa’s men are interested in signing the 24-year-old left-back, with a deal set to cost them €15m (£12.8m). Left-back is a position that needs attention for Leeds this summer, with Gjanni Alioski’s future hanging in the balance given that he is out of contract soon, although a new deal has been offered to him.

And speaking during a live video for Leeds Live, Cross provided fans with an update on how close the deal supposedly is, claiming that a deal does indeed look to be in the works, but that there is still a while to go before it can start to be considered official:

“It became clear across the weekend that Leeds were prepared to acknowledge that he was on their list, he was at the top of their list, but right now they’re in something of a holding pattern.

“I think a lot of these things clearly get debated verbally, informally, before then going through the rigmarole of putting things down in ink on paper, and there’d be no sense in doing that and wasting everybody’s time unless verbally you had some kind of indication as to how the deal might look.

“So I think there is cautious optimism, a quiet confidence from the Leeds end this one could happen, but I think we are looking at days rather than 24 hours, anything like that.”

How many players do you think Leeds need to sign this summer?

Given the situation with Alioski, it is imperative that Leeds United get this deal as close to completion as possible, just so they have multiple options available to them moving forward.

If Alioski decides to leave, then Firpo would theoretically slip into his place at the back. But at the same time, if Alioski does decide to stay, they can either decide to still bring Firpo on board or even call the deal off if they are more comfortable with Alioski given his familiarity with Bielsa’s system.

At the end of the day, so long as things can be in place and they aren’t frantically panicking trying to find solutions, that’s all that you can really ask of them.