Exclusive: Pundit reveals that Raphinha loves being at Leeds 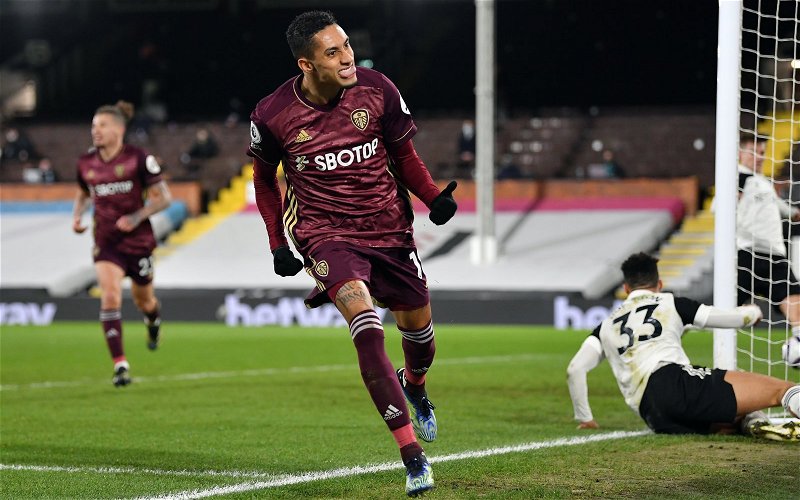 There has been a grey cloud hovering over Elland Road recently with reports claiming that Liverpool were interested in Raphinha, however former midfielder David Norris has quashed those rumours.

Raphinha enjoyed a standout debut season in the Premier League after arriving on deadline day from Rennes, a decision he had to make quickly, and after 15 goal involvements the Brazilian appears to have settled in perfectly.

Liverpool were said to be looking at making a move for the talented winger, however reports have confirmed that no approach has yet been made for Leeds’ silky winger.

Despite Raphinha showcasing his talent on the biggest stage and helping Leeds finish in the top half of the Premier League, Norris insists that the Brazilian is loving life in Yorkshire so can’t see him wanting to leave, as he exclusively told This is Futbol:

“He loves it there and the fans love him. He’s come out publicly and said that and also from people I’ve spoken to and the fans, they all seem to love him.

“So, that’ll be a relief for them and obviously things can change but considering he’s come out publicly like that you’d be surprised if he then ends up leaving.”

If Raphinha was to join Liverpool then he would not be a guaranteed starter every game like he is at Leeds because even Mohamed Salah doesn’t start all 38 Premier League games so it would not be good for his development.

Leeds appear to have real momentum and enough money to keep the club moving forward so it would be a bizarre decision if any of their top players didn’t want to stay with them for the ride and see how high up they can go.