TalkSport insider Alex Crook has provided an update on Fulham’s search for a potential new manager.

Recent reports seem to suggest that incumbent boss Scott Parker is on the verge of leaving the club and making a move to fellow Championship side AFC Bournemouth. And with Fulham players already returning to preseason training, time is running out for them to get someone in the dugout and get the team prepared for a run at promotion this upcoming season.

And it looks as if they could be running into trouble in trying to make that happen. Speaking on TalkSport (5:42), Crook spoke about Parker’s impending reported departure before moving on to describe what the latest was with their search for a replacement:

“That [Parker leaving for AFC Bournemouth] does have ramifications for another Championship club. Steve Cooper, who of course has been linked with Crystal Palace, I know he’s on their lengthy list of targets, Fulham keen on him as well.

“The stumbling block is a £3m release clause that Swansea have inserted into his contract. At the moment, I’m not sure that Fulham really want to pay that, so it’s gonna be fascinating to see how that one pans out as well.”

Would Steve Cooper be a good appointment for Fulham? 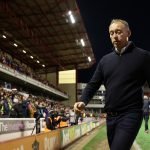 The appointment of Cooper does look like it would be a progressive one for Fulham. Cooper has done impressive job with Swansea City, playing a brand of ‘entertaining football’, and taking them to the play-offs in back-to-back seasons and rising from 6th to 4th in the process and all whilst being a selling club and not being able to invest properly in return.

So if he can manage at that level with financial restrictions, if he’s allowed more freedom to recruit, with history showing that Fulham’s owners aren’t scared to spend, then this could be the start of a winning combination for both Cooper and Fulham.

And with the financial incentive that is available for Fulham if he is able to take them up to the Premier League, they will get their money back and then some if he does end up being a success for them. So in the grand scheme of things, if Fulham want to make him their manager, they shouldn’t be squabbling over something as small as £3m.

In other news: Tom Cairney’s tweet has left many Fulham fans buzzing