Marcus Bent thinks that his former side should be all over Harry Winks, who he describes as an Everton type of player.

Having lost his regular place at Tottenham, the midfielder could be sold this summer. 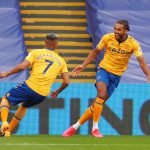 Winks, who was once likened to Spain legends Xavi and Iniesta by Mauricio Pochettino, made just nine Premier League starts for Spurs, with Pierre-Emile Hojbjerg haven taken his place, whilst featured just 15 times in the league throughout.

He was strongly linked with a January exit, although ex-manager Jose Mourinho blocked the move with Tottenham still in three cups and fighting for Champions League qualification.

Winks saw more game-time following Mourinho’s departure, featuring in five of the six games under Ryan Mason, but with youngster Oliver Skipp expected to fight for a first-team place next season, his opportunities might well be limited once more.

Having racked up more than 150 senior appearances, 41 of which have come in Europe, Winks isn’t likely to be short of buyers, and Bent exclusively told This is Futbol that he would fit the bill at Goodison Park:

“He’s not in favour at Tottenham, so I think they could get him on a good deal, I don’t think his wages would blow the roof off.

“I think he would be in the first XI coming from Tottenham, going into a new stadium, new manager, but Winks is a talented player, very skilful, so I think Everton regardless of the manager, if he were up for coming, they would take him.”