Everton podcaster Barry Cass has been sharing his thoughts on the possibility of Duncan Ferguson being named as the Merseyside club’s next permanent manager.

This comes after Cass made an appearance on a recent video from the Toffee TV YouTube channel where he spoke about a range of topics concerning the club.

On the subject of their search for a new manager, after Carlo Ancelotti recently left for a move back to Real Madrid, Cass had this to say about the possibility of Ferguson taking the reins on a permanent basis and the possibility of his relationship with the fans being damaged if he were to take the job and be unsuccessful at it.

He said: “That’s the gamble with any manager, any manager that takes it knows that at some stage you’re going to get sacked. So, for Duncan, if he wants it and listen, I’ve still not heard [or] seen a quote from him saying he wants it, he’s just been linked.

“It would be a big risk for him, of course it would, and if he comes in and he had a go and he got it wrong, then of course he’d be sacked because every manager gets sacked and then he’d be done at Everton, wouldn’t he?

The 49-year-old has been Everton’s assistant coach since December 2019 and worked with Ancelotti for a total of 67 games.

Given how long Ferguson has been at the club and the experience he has working for them, and the fact that he has had a stint as the club’s caretaker manager where he picked up two draws and a win back in December 2019 before Ancelotti arrived, we feel that Ferguson deserves to be considered as a potential candidate to manage the team.

However, Ferguson has only taken charge of four games at Everton, which came during his caretaker manager stint back in the 2019/20 season. And given he has no other managerial experience other than that, so it would perhaps be quite a surprise if they did decide to give him the job with the likes of Nuno Santo and Erik ten Hag linked. 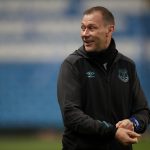 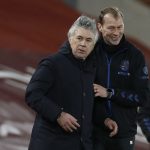 In terms of his relationship with the fans being potentially damaged if he were to take the job and find himself struggling to succeed at the helm of the club, this is undoubtedly a serious consideration he and the club’s owners would have to take into account if he were to be appointed, in our view.

In other news: ‘The plot thickens’ – Insider claims boss may have ‘had a tap on the shoulder’ from Everton