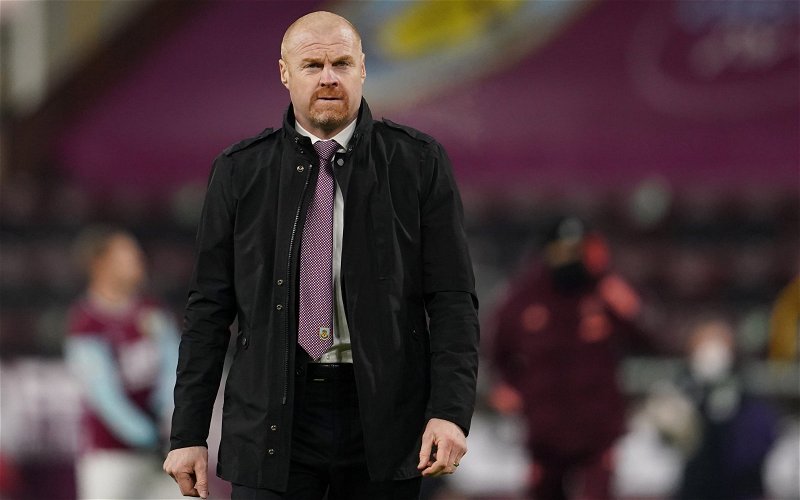 Duncan Castles and Ian McGarry have been speaking on the latest edition of The Transfer Window podcast about Sean Dyche’s Burnley future.

Dyche has been the Clarets’ manager now since 2012, and in that time, he has taken Burnley into the Europa League and kept them in the Premier League for five consecutive seasons.

However, he has been reportedly unhappy at Turf Moor because of the lack of spending in the transfer market and has been heavily linked with the vacant Crystal Palace job.

Therefore, it looks as if the Clarets are preparing a new contract to keep Dyche at the club.

Castles said: “I’m told they’ve made him an offer of a long-term deal with a pay rise to around £6m per year. Substantial extension in terms of security, he would retain the powers he has over the transfer market, which are just about as strong as anyone in the Premier League.

“[He] basically [has] the authority over the direction of the club delegated to him in a way that few managers have these days.”

However, McGarry believes that Dyche wants more funds to spend; otherwise, a pay rise will not be sufficient to keep him at Turf Moor.

He said: “My information in terms of Dyche is that he’ll need more than a substantial pay rise in the contract extension to be persuaded to stay. Most of the aggravation and friction he’s had with the board has been over player recruitment. He feels like he has not been given assets which reflect the achievements of the last two to three seasons.”

Do you think Dyche will leave?

Yes, he will go

In his time as Burnley manager Dyche has spent just over £140m on transfers, which if you work it out per year is roughly just £15.5m.

Though, apparently, he has control over who the club sign, he has never been given that much money to improve his squad, which has clearly caused problems.

It will be interesting to see if Dyche decides to stay on at Turf Moor or if he thinks that he has done all he can with the Clarets, especially with Palace sniffing around.

In other news: ‘In a precarious position’ – TalkSport pundit drops Dyche claim at Burnley