Recent reports have linked the 21-year-old Portuguese defender, valued at £6.3m on Transfermarkt,  with a move to the Emirates Stadium as they look to bring in a cover for incumbent left-back Kieran Tierney. The Scot has been susceptible to injuries throughout his career and with Sead Kolasinac reportedly being tracked by Lazio and Fenerbahce, the Gunners could find themselves very thin in that department.

And speaking on the latest edition of his show, Watts updated fans on what stage the negotiations were currently at, and whilst he did note there appeared to be conflicting claims about what stage the proceedings were at, a move to north London seemed pretty likely at this stage:

“Arsenal are in talks with Benfica – sources in Portugal and in England confirming this to me. In Portugal, some of the sources that I’ve spoken to suggesting it’s very, very close. Sources at Arsenal are maybe trying to temper things a little bit, temper expectations, saying it’s more ‘we’re not at that sort of stage yet’.

“But from what I’m hearing, it certainly seems like there is growing confidence that this could be a deal that is done. Nothing is agreed yet, nothing’s signed, so obviously it could all go wrong. I am told there are other clubs interested in him as well, but Arsenal very much at the front of the queue trying to get this deal done.”

Is a move for Tavares a good move? 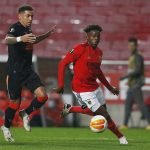 The move does come across as a weird one on the surface, predominantly because of Tavares’ age and the stage he’s at in his career.

At age 21, and having played semi-regularly for Benfica last season, starting 14 games for them, including three in the Europa League, it seems like this would be the season that he would want to become a regular for a team. And barring a major injury for Tierney, given his standing and presence at the club, that probably isn’t going to happen at Arsenal.

If Tavares was a little bit younger or someone still earmarked for the future, or even a 30+ veteran on the downswing of their career, it might make more sense to make this move to sit behind Tierney. But Tavares, if indeed he signs, seems to be stuck somewhere in the middle of the two and that could cause some problems if Tierney remains as first-choice and Tavares doesn’t get much playing time.

In other news: ‘My information’ – Dharmesh Sheth reveals ‘Arsenal hierarchy’ set for vital meeting with player