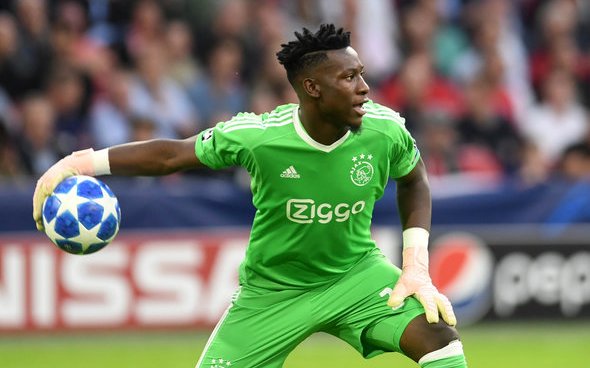 This comes after Romano co-hosted a recent episode of the Here We Go Podcast where he spoke about a range of transfer-related topics going around at the moment.

On the subject of Arsenal’s reported interest in Onana, who is currently serving a year-long ban for a doping violation, Romano had this to say on the matter. (17.33)

He said: “They need to see what happens with the suspension because this will be key to understand if Arsenal will proceed to sign him, how much will be the price of the player, so they need to wait on the suspension.

“He was discussing his ban today in court with Ajax. Let’s see what will be the final decision for the suspension, but UEFA are still on the same position, but Arsenal are interested because if the situation would change they want to try.

“They are in touch with his agents, he was close to joining Arsenal in January – they were in talks with his agent in January. Now, the situation is still on the table because they are seriously considering to move for Onana and he’s a serious target for Arsenal.”

Onana joined Ajax back in the 2015 January transfer window from Barcelona’s U19 squad for a fee of £135k. Since then, the 25-year-old, who is currently valued at £27 million, has gone on to make 204 appearances for the Dutch club across all competitions in which he has managed to keep 83 clean sheets in the process (per Transfermarkt).

Back in February, the shot-stopper was handed a 12-month ban for doping violations after reportedly mistaking his wife’s prescription medication for aspirin. In a recent hearing on the matter, Onana said it was down to a human error on his part due to the identical packaging of both medications (per The Telegraph).

Taking into account what Romano had to say on the matter, it seems that the outcome of Onana’s hearing will be a big factor in Arsenal’s reported chase for the goalkeeper this summer.

Should Arsenal make a move for Onana this summer?

In our view, if Onana’s ban is dismissed then Arsenal should move ahead with their reported interest in him and try to bring him to The Emirates as a replacement for Mathew Ryan whose current contract is set to expire at the end of the month.

In other news: ‘Puts Arsenal out of the equation’ – Charles Watts deals Arteta potential transfer blow