Jon Newsome believes Norwich City will “go again” if Max Aarons follows Emiliano Buendia out of the exit door at the club.

Since their promotion from the Championship into the Premier League, a number of Canaries players have been attracting interest from various clubs.

Aston Villa have already struck an agreement to sign Buendia, paying a reported £33m to snaffle him away from Carrow Road. 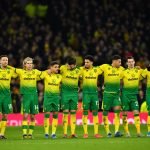 Buendia enjoyed a fantastic season last term, scoring 15 goals and registering 17 assists, but he will now move to Villa Park to join Dean Smith’s ambitious side.

Aarons has also been linked with a departure, amid reports of interest from Everton and West Ham United, and a deal for the right-back would cost around £30m, per The Independent.

That would see Norwich’s coffers swell significantly and Newsome believes that Norwich will use the money wisely and ensure they bring in some new stars who can develop and again be sold on for a major profit.

Aarons, after all, is a youth product and Buendia cost £1.5m to sign on a permanent deal from Getafe after an initial loan.

Speaking exclusively to This Is Futbol, ex-Norwich star Newsome said: “You’re talking £65m, £70m. That’s a hell of a lot of money dropping into the football club and if your scouting system and your recruitment is at a level that we think Norwich’s already is because of the past experience and past exploits, then they go again.

“They have their targets, they bring new people in, they coach them, they develop them, they make them better players and it happens again and again.”