Many Leeds United supporters have been discussing the club’s links with a move for Napoli star Eljif Elmas.

According to The Athletic, Leeds are showing some interest in signing Elmas from Napoli. Apart from them, Benfica and Borussia Dortmund are also keeping an eye on the North Macedonian and the interested parties could look to make loan or permanent moves. 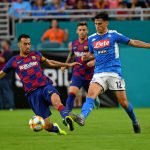 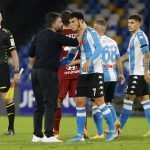 Elmas doesn’t have a release clause in his contract, but information The Athletic’s ‘The Radar’ states that other parties are eyeing the player.

The 21-year-old Elmas had joined Napoli from Fenerbahce in the summer of 2019 but he has only directly contributed to six goals in 80 appearances for the Partenopei.

It is not clear what Leeds’ current stance on the player is, with their interest being dated as far back as January by The Athletic. Nevertheless, the news about the Whites’ interest in Elmas drew the attention of many supporters, who made their views clear about the links.

What do Leeds fans make of Elmas?

“It would be nice if there was any truth in this.”

“PLEASE.”
Credit: @LufcLuca_
“Leeds were in for this guy last over a year ago. Top player.”
Credit: @Rhino12344
“Heard about him for all of 10 mins and now I’ll be gutted if we don’t sign him. Along with Cunha. Can’t wait for the heartbreak.”

“Another North Macedonian. Is Gjanni acting as agent?“

Many of these fans are happy about this news and some of them want the club to move for the midfielder.

As per FBRef, Elmas is a progressive carrier of the ball and despite a low goal contribution rate, his non-penalty Expected Goals and Expected Assists metric stands at a decent 0.30. The midfielder also comes across as a reliable short-passer, as he completed 93.1% of his short passes.

Considering that he is still pretty young and Pablo Hernandez has left a hole in attacking midfield at Elland Road, perhaps signing Elmas won’t be a bad idea for Leeds.

In other news: ‘Oh dear’, ‘Shocking from us’ – Many Leeds fans fume as ‘terrible news’ emerges