The Yorkshire club tweeted a video of loanee Jack Harrison, who spent the 2020/21 campaign with Marcelo Bielsa’s side from Manchester City.

Do you want to see Harrison signed permanently? 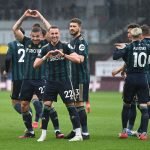 It has been reported Harrison will sign for Leeds on a permanent deal in a deal believed to be worth in the region of £10m-£15m.

The 24-year-old made a huge impression on the Leeds side this season having played 36 times in the Premier League alone, in which he was able to score eight times and provide eight assists (via Transfermarkt).

Leeds fans flocked to the tweet from the official club account to show their optimism surrounding the video as being a potential sign towards the reported permanent signing of Harrison this summer.

@Jackleedslad
“Improved season on season since he arrived! 11 mill is a steal for him”
@LukeRiddell24
“It’s time”
@JDLUFC11
“Get him signed”
@nashblaine1919
“Well it’s happening”
@lufcjm
“This is effectively the signing announcement”
@tmcgee2001

Harrison is currently valued at £13.5m by Transfermarkt and it is believed the Yorkshire club included an option-to-buy clause when they confirmed the permanent signing of Harrison last summer.

Going by the reaction of these Leeds fans, it is apparent they would love to see their club sign the 24-year-old permanently this summer having had such an impact during the 2020/21 campaign.

In other news: Exclusive: David Norris drops brutal verdict as LUFC miss out on big-money target