The club tweeted out a message from James Forrest and Callum McGregor for their soon to depart captain – Scott Brown.

Is McGregor a future Brown replacement? 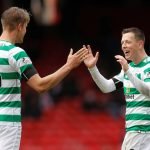 The 35-year-old midfielder is leaving Celtic at the end of the 2020/21 campaign with a move to fellow Scottish Premiership side Aberdeen set up for Brown to join in a player/coach role.

With the Parkhead veteran leaving the club in a matter of weeks, Forrest and McGregor thanked the Celtic captain for everything he has done for them and the club during his time with the Bhoys.

In response, Celtic fans flocked to the tweet to give their thoughts on Brown with his contract set to expire at the end of the month.

“What an amazing player to have as a leader and Captain been brilliant through the years watching him from the stands and seeing all the big players in Europe he’s faced also. Hail Hail Broony “

@JPbhoy2
“Great. Here come the tears AGAIN.”
@kovacpls
“It has been an emotional journey for us all during your time with us Scott. You have led us with distinction and deserve the accolade of Legend. Thank you from the bottom of my heart and best wishes to you and your family for the future”
@sweeper67
“Good luck and good bye Broony HH”
@HMccallum1967
“stop it! if you ain’t tweeting about then it’s not happening!”
@pukki_bhoy
“my captain”
@liamarmour1
“He should be staying with us and coaching under the new gaffer. Whenever that happens.”
@paulconn75

Brown joined the Bhoys in 2007 from Hibernian and has since gone on to make a staggering 609 appearances for the Parkhead side (via Transfermarkt).

All in all, it is apparent these Celtic fans are gutted to see Brown’s time at Parkhead come to an end, however, his service for the club will surely leave him with legendary status.

In other news: ‘No way’, ‘Massive loss’ – Lots of Celtic fans react as rumour emerges