Tottenham Hotspur journalist Alasdair Gold has been speaking on his latest Youtube video about all things related to the north London club.

One topic of discussion was the club’s ongoing search for a new permanent manager following the sacking of Jose Mourinho last month, ending the 58-year-old’s 17-month stint in charge of the club. 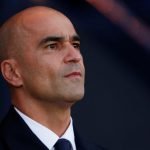 Ryan Mason has taken interim charge of the Lilywhites until the end of the season but the former Spurs star suffered his first Premier League defeat on the weekend to Leeds United.

One name which has been linked with being a possible candidate for the vacant job in north London is current Belgium boss, Roberto Martinez.

However, Gold admitted during his Youtube video that he feels the appointment of Martinez would not go down well with the fans.

He said (59:00): “Let’s see what the next few days or weeks bring. Like I said I think they’re getting there with the manager. And I think we’ll find out, hopefully, I don’t think it’s going to drag into the summer let’s put it that way.

The Spaniard spent three years as Everton manager and was able to direct the Toffees to some impressive league finishes, however, his time at the club was marred by their poor league finishes in his final two seasons at the helm (via Transfermarkt).

Some Spurs fans have already shown their disgust in being linked with the Belgium manager with many feeling it would be a step in the wrong direction by appointing the 47-year-old.

One thing which could possibly count against Martinez in potentially becoming the next Spurs boss is that the club would have to wait until after this summer’s Euros before the Spaniard would be in a position to take the reins at the club.

In other news: ‘This club’s a joke’, ‘Are you serious’ – Lots of Spurs fans fume over official club update