Dan Sheldon has featured on the latest episode of the Total Saints podcast to discuss all things related to Southampton following their defeat to Liverpool.

The defeat suffered by Ralph Hasenhuttl’s men on the weekend left the Saints slumped down in 17th place of the Premier League table but their win over Crystal Palace on Tuesday saw them climb back up to 14th spot.

Should Romeu play again this season if avaiable? 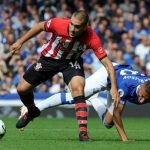 However, their top-flight status has been confirmed for another year after Fulham were relegated on Monday night.

And Sheldon provided another positive for the Saints fans as he gave an update on the fitness of Oriol Romeu.

The 29-year-old has been out of action since late February with an ankle injury but Sheldon has revealed the Spaniard is ahead of schedule in his comeback.

He said (39:27): “Yeah, there’s a positive for you if we’re scratching at the barrel, but no, that is a genuine positive that I think Oriol [Romeu] may be ahead of schedule.

“Which is, you know, probably pays into the fact that he has that kind of warrior narrative around him and he’s just an all-around great guy.

“So yeah, if he is going to make it back before the end of the season, then yeah, absolutely fantastic.”

The Saints have now had their stay in the Premier League extended by at least another year so it begs the question of whether it is worth playing Romeu even if he is available before the end of the season?

He suffered a fairly severe ankle injury which forced the midfielder to undergo surgery, and with that in mind, we think it may be a risk that is not worth potentially setting him back again.

In the 14 Premier League games Romeu has missed through injury this season, the Saints have won just four games so his impact is clear to see but surely Hasenhuttl will rest him if he is available for any of the final three games.

In other news: ‘You’re looking at’ – Journalist drops claim on Lemina’s future at Southampton