Journalist Scott McDermott has been speaking about Rangers and their plans heading into the summer transfer window.

With the league title wrapped up and with only the formality of some dead rubber games, for Rangers at least, left to go, attention at Ibrox can start to turn towards what the team is going to look like next season and who they may need to sell.

Rangers didn’t lose any of their big-name players last summer and were able to invest in players like Kemar Roofe, Ianis Hagi and Jermain Defoe, but speaking on the Record Rangers podcast (10:33), McDermott felt that the challenges that met the club this season are different to what the club wants to do in 2021/22 and as a result the club will need to look at selling players on in order to bring others in:

“I don’t think they’ll hold on to everybody. I think Dave King and Steven Gerrard both said fairly recently that there would need to be some player trading this summer and I think that remains the case. I think you’re right, Rangers did well to hold on to all their best players last summer and they did that because of the magnitude of this season and what was at stake in terms of stopping 10 in a row.

“I don’t think they can go another summer like that because Gerrard wants to strengthen, he wants to bring people in, I don’t think he can keep the entire squad as well as adding to it.” 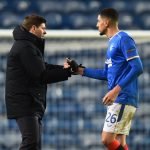 McDermott is right when it comes to Rangers and their plans, because now that they have got the monkey off their back by stopping Celtic’s dominance, they need to take that step forward to stay there, as well as make progress in Europe.

And unless the club are willing to spend big money to make it happen, and with the club in the financial situation they are, they are going to have to sell players off first to bring the money in. Just how much they need to raise and how many players they are set to lose though is still very much an unknown at this point.

In other news: ‘It’s no surprise’ – Pundit reacts after rumours on ‘key player’ at Rangers