Pundit Russell Boyce has been speaking on the latest edition of A Celtic State of Mind podcast to discuss all things related to the Parkhead side.

With the summer transfer window quickly approaching, the pundit provided his thoughts on the hot topic of the Aberdeen ace, Lewis Ferguson. 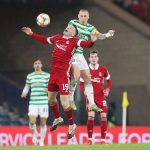 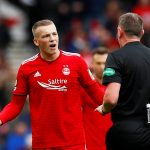 The 21-year-old is the topic of much transfer speculation ahead of the summer with comments (via The Scottish Sun) from his uncle, Barry Ferguson recently hitting the Celtic headlines.

It was reported last week that Aberdeen had rejected a £2m bid for the youngster from newly-promoted Watford amid rumoured interest from Scotland.

Speaking about the 21-year-old midfielder, Boyce firmly believes Celtic should be making a move for Ferguson this summer.

He said: “We only need to look at his teammate Scott McKenna to find out Aberdeen do deals when they have unhappy players. They rejected £6m for Scott McKenna then sold him for about £3m.

“That may well be Lewis Ferguson’s way of thinking right now that he could drive his price down and make himself an affordable person of interest to the other side of the city.

“Whereas if I was Celtic, I would gazump that right now, meet the asking price, get him in and what a statement signing he would be.

“This guy is staunch, you sign him at Celtic, it is box office for more reasons than just what he can do on the pitch.”

It certainly seems like this is a potential transfer saga that will be of interest to a few teams with so much reported interest in the midfielder from both teams in the Scottish Premiership and English Premier League.

Ferguson has had a terrific season for the Dons having netted eight times and provided four assists in the Premiership alone (via Transfermarkt).

Despite comments from his uncle, it will be interesting to see where the 21-year-old’s future lies if he is to make the move from the Pittodrie Stadium.

In other news: ‘This excites me’ – Stiliyan Petrov issues verdict at Celtic