The latest episode of the Celtic Huddle podcast recently came out and the panel talked about numerous issues involving the Hoops following their 4-1 loss to Rangers. Amidst all that, McGarry was asked about the future of Christie.

The journalist stated that while clubs like Nice are interested in Christie, the Scotsman is interested in a move to England and he’s given no indication of signing a new deal at Parkhead.

Christie has been linked with a move to Burnley and Norwich City in recent days and it has been reported that his contract at Celtic actually runs out in January 2022 and not in the summer of 2022, meaning that he’ll be free to discuss terms with clubs in the upcoming summer.

Will Christie move to the Premier League? 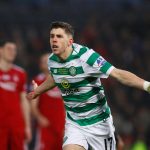 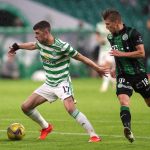 McGarry talked about Christie’s future, revealing that it is only a matter of formalising his move to England.

The journalist said on the podcast (2:21): “Ryan Christie has given no indication at all over the last year that he’s inclined to extend his stay. And it has emerged [over] the last couple of weeks that his contract unusually expires in January, not next summer.

“So he’s therefore entitled to speak to clubs this summer. However, the likelihood is, given it’s pretty clear he will be moving on, this will just be accelerated and he will just move on for a considerable fee. It won’t obviously be huge money but it’ll still be seven figures fees.

“The club’s at the moment that seem to be leading the chase for him are Norwich – they’ve obviously just won the Championship, and Burnley, who still need a result actually to make sure they are in the [Premier League] next season. There’s also been interest from overseas – Nice were interested last year, there’s one or two options there. But I think the player would probably like to move to England. It does look like it’s just a matter of formalising that move.”

Only Christopher Jullien has picked up a higher rating than Christie this season in the Premiership for the Hoops, which shows the Scotsman’s importance for the club.

The 26-year-old Christie has been a regular source for goals at Parkhead over the last few seasons and ideally, Celtic would want a considerable fee from his sale because of his contributions.

But the fact that it might not be possible now because of Christie’s contractual situation shows that Celtic haven’t handled the midfielder’s contract well and they might regret it in the summer.

In other news: ‘I still had two years left’ – £2.25m-rated ace reveals he was pushed out of Celtic