Lots of Celtic supporters have been discussing the club’s links with a move for Aaron Boupendza.

According to Turkish outlet Milliyet, Boupendza, who has just one year left on his current deal at Super Lig outfit Hatayspor, reports in his native Gabon suggest he has been the subject of a €6.5m (£5.6m) bid from Celtic, with the Hoops currently in negotiations over a move.

The report goes on to claim that the player himself would want to stay in Turkey, with the likes of Fenerbahce and Galatasaray also drawing links with the league’s highest scorer, and that discussions are still continuing. 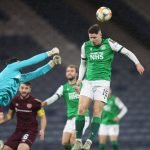 This update about Celtic was relayed on Twitter by Everything Celtic and many Hoops fans made their views clear about the news.

What did Celtic fans make of the news about Boupendza?

“Eddie Howe working behind the scenes.”

“Didnt we try get this guy before.”

“Swap any of our ST for this guy.“

With Odsonne Edouard being linked with a move away from the Hoops and Leigh Griffiths’ future uncertain too, the Bhoys might need a new striker in the summer.

Boupendza, 24, has scored 22 times in the league this season and his rise to stardom has been rather sudden, going by his record at previous clubs. He has racked up a rating of 7.25 for his club in the campaign, having been the team’s highest-rated player too (as per WhoScored).

So that is a promising sign and because of that, it is easy to see why these Hoops fans would want to sign the striker.