A lot of Celtic fans have taken to Facebook to voice their thoughts on the latest transfer claim to emerge regarding their defender Kristoffer Ajer.

According to the Daily Mail, Newcastle United are to ‘press ahead’ in an £8m bid to sign the Norwegian centre-back this summer with the defender keen to join the Premier League. 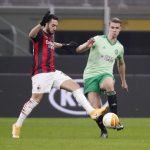 Ajer has been with the Bhoys since his move from the Norwegian side IK Start for a fee believed to be worth in the region of £500k (via Transfermarkt).

The centre-back has played a prominent role in the Hoops’ season having made 31 appearances in the Scottish Premiership alone this campaign.

In response to the Facebook post relaying the claim, Celtic fans flocked to slam the rumour with many believing the player to be worth more than the £8m suggested.

The report also states there has been interest from Norwich City who have secured promotion to the Premier League for next season and Serie A side AC Milan.

Going by the reaction of these Celtic fans it is evident to see their frustration at the reported £8m bid Newcastle are said to be making with many valuing him a lot higher.

In other news: ‘Get him signed ASAP’, ‘Would be a quality signing’ – Lots of Celtic fans react as claim emerges