The Athletic’s Tim Spiers has been speaking on the latest episode of The Molineux View podcast to discuss all things Wolves related after the victory over Brighton & Hove Albion.

Sunday’s victory against the Seagulls saw Wolves close the gap on Aston Villa to just three points with only three games remaining in their 2020/21 Premier League campaign.

Should Hoever be starting ahead of Semedo? 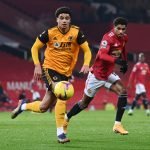 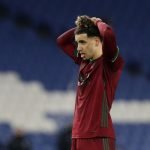 Dutch right-back, Ki-Jana Hoever, was awarded a rare start and played the full 90 minutes as summer-signing Nelson Semedo watched on from the bench.

Hoever was given a 7.02/10 rating for his performance against the Seagulls by WhoScored in what was just his 11th Premier League appearance of the season.

Discussing the impact the younger players had on the game against Graham Potter’s side, Spiers provided the listeners with a glowing review on Hoever’s display.

He said (14:00): “On the other flank, I was unbelievably impressed with Ki-Jana Hoever. And it’s not like he had an 8/10 or a 9/10 game and set up loads of chances and took loads of players on it was just a very sensible, intelligent performance.

“And I thought his defensive positioning was great. I thought his overlaps were really smart. He didn’t really give the ball away. He didn’t do anything daft defensively. I think he could show [Nelson] Semedo a thing or two, to be honest.

“I was really impressed by how he dovetailed with [Adama] Traore, which we haven’t really seen all season from Semedo just in fits and starts really. So I thought he was great. Everything I’ve heard about him is positive. And he’s so young, but I think he’s got a really bright future.”

Following the departure of Matt Doherty to Tottenham Hotspur last summer, Wolves invested heavily in the right-back position. Semedo was brought in for £27m (with add ons) from Barcelona and Hoever from Liverpool for around £10m.

However, with Spiers suggesting that Semedo has not exactly lived up to the expectations of the coaching staff or fans since arriving in the Premier League, this could potentially leave the door open for Hoever to claim the right-back spot.

Going by Spiers’ glowing review of the 19-year-old’s display against the Seagulls it would suggest he certainly has the potential to take that right-back spot off Semedo. And potentially a good run of games before the end of the season could help him nail down a place in the starting XI.