Scott Parker and his men are on the verge of being relegated from the Premier League, and as such there are likely to be some teams that want to pick off the personnel that they think will be able to help them next season.

Parker himself has been linked with the head coaching job in North London, but speaking on the latest edition of the Zonal Marking podcast (41:55), Cox felt that he shouldn’t be the only one making the move from South West London this summer, with the Serbian forward, valued at £16.2m on Transfermarkt, serving as the ideal backup for Harry Kane:

“If you’re Tottenham trying to get a player who can be a plan B to Harry Kane, the problem is who do you bring in? Because you don’t want to spend £40/50m on a really good number nine, who then you have to convince him to sit on the bench.

“I just think it ticks all the boxes, I think he is really good at what he does. It’s just what he does, as you say is, is pretty limited and probably not good enough to be a regular.”

Would Mitrovic be a good signing for Spurs? 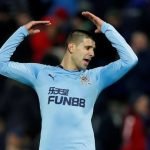 Cox’s comments might come off well, especially with the Champions League carrot that could be dangled in Mitrovic’s direction, but it might have to take a lot more than that to convince him to make the move. At the age of 26, it’s not as if he’s on the comedown in his career

And with him being so crucial to his native Serbia, becoming their top scorer earlier this year, would he really be willing to sit on the bench behind someone like Kane who, although he has his injury problems will always be first-choice? It’s not impossible, but you’d imagine there would have to be a lot of other incentives thrown his way in order to make it a reality.

In other news: ‘Sign me up’, ‘I’d take him’ – Many THFC fans delighted ‘incredible’ manager has been linked