Lots of Tottenham Hotspur fans have been left disgusted by John Fleck’s incident with Giovani Lo Celso in Sunday’s clash in north London and have vented their anger on Twitter.

Spurs cruised to a comfortable 4-0 win over the relegated Sheffield United on Sunday, however fans were left outraged as it appeared Fleck stood on their Argentine midfielder and caught his head with his studs.

Should Fleck have been red carded? 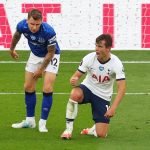 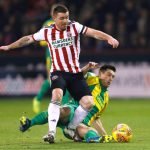 Lo Celso was already on the ground following a coming together between the two which ended up with the Scotsman catching the Argentine’s head whilst he was on the turf. The incident went to VAR, but following the review, referee Andre Marriner was not instructed to look at it himself and the midfielder was let off without punishment.

An image was put up on social media by @lastwordonspurs (which was taken from the match as it was aired live on Sky Sports), Spurs fans were left furious with the Blades 29-year-old midfielder and believed he should have been shown a straight red card for the incident.

“Absolutely disgusting. Should be something retrospectively taken on that and the officials.”

@Cornwall8
“Can’t believe this wasn’t a red, it’s an absolute VARce”
@ReubsJ1
“The fact he looks at him before doing it is shameful”
@simplyjambo
“Shocking decision. VAR is a parody.”
@ByggmOve
“Absolute joke”
@darrylr06
“Just ridiculous, this is why we need to get ex-players on VAR, everyone who’s played the game knows what he’s doing there, disgusting”
@Jack1Metcalfe
“Crazy VAR”
@JJ6573914
It is clear these Spurs fans were not impressed by Fleck’s actions and even more annoyed that VAR, Peter Banks, did not deem the incident worthy of a red card.
The victory saw Spurs shorten their gap on fourth-placed Chelsea to five points but with just four games remaining Spurs will need some major slip-ups from other teams to earn a spot in next season’s Champions League.

In other news: ‘Yesss’, ‘I’m on my knees’ – Lots of Spurs fans elated as new manager candidate surfaces