A lot of Tottenham Hotspur fans have taken to Twitter to voice their thoughts on the latest claim to emerge in their ongoing search for a new permanent manager.

One name which has emerged as a potential candidate for Daniel Levy is that of former Chelsea manager Antonio Conte.

Who would you rather as the next Spurs manager? 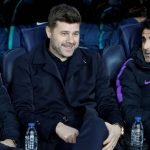 The Italian manager left his post at Inter on Thursday as a result of a reported disagreement with the club ahead of the upcoming summer transfer market.

Conte guided his Inter side to the Serie A title in the 2020/21 campaign but was believed to be frustrated by the club’s reported approach to selling key players this summer.

Spurs fans flocked to a tweet from Hotspur Related relaying a claim from the print edition of Tuttosport (via SempreInter) suggesting Conte has set his sights on joining the north London club.

“This is what every Spurs fan should want”

Tottenham have been without a permanent manager since April after Jose Mourinho was shown the exit door by Daniel Levy, leaving former midfielder Ryan Mason as interim manager for the remainder of the season.

Going by the reaction of these Spurs fans, it is apparent they would be delighted if Conte was to joining Spurs this summer, but it is also reported he is receiving interest from Real Madrid.