Lots of Tottenham Hotspur fans have flocked to some comments from Harry Kane that emerged on social media.

Kane was recently interviewed by BBC Sport and the Englishman talked about his career ambitions. The striker made it clear that while he has done many things in the game already, there are certain other things that he wants to achieve in his career.

Do you think Kane will stay? 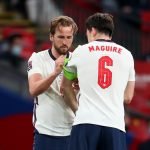 Kane said that he’s previously talked about winning trophies and doing that is why he plays the game and that’s why he became a footballer too.

These comments from the Englishman were relayed on Twitter by Hotspur Related. Many Tottenham fans made their views clear about Kane.

What did Spurs fans make of Kane’s comments?

“This is just him speaking to media about leaving. We need to be honest to ourselves, he’s not getting near a lot of trophies playing for us is he.”

Spurs currently find themselves at sixth in the Premier League table and they are five points behind fourth-placed Chelsea.

Kane has drawn links with a move to Manchester United in recent days. Manchester City have also been linked with the Spurs star, which points to the fact that Kane is a man in demand from other clubs in England.

“This summer will surely be goodbye and who can blame him.”

“He’s off, need to thank him and wish him the best, a shame we couldn’t match his ambition.”

A lot of these Spurs fans believe that Kane will be leaving in the summer and his comments seem to point to that.

While Kane’s comments suggest that he wants to win trophies at whatever cost and Spurs haven’t done that for a while now, it has been reported that the club will not entertain any offers for the striker.  So perhaps, Spurs fans should be calm about this situation.
In other news: ‘Wow’, ‘Omdddd’, ‘Shows exactly what’s wrong’ – Lots of Spurs fans fume over Gold’s update