Lots of Tottenham fans have been talking about the latest tweet from Alasdair Gold that emerged on social media.

Gold recently tweeted before Tottenham’s Premier League clash against Aston Villa. His tweet stated that Kane was announced to have won three of the club’s Player of the Season awards. The Englishman got an ovation from the Spurs fans and a lady in the crowd was holding a banner which said ‘Harry Kane, Tottenham legend’.

This comes after Sky Sports had reported that Kane has told Tottenham that he wants to leave, amidst interest from Chelsea, Manchester United and Manchester City.

Can Spurs replace Kane in the summer? 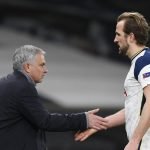 Fabrizio Romano also tweeted about the Englishman recently, claiming that Kane’s desire to leave the club is confirmed and Man City are looking to open talks soon.

Gold’s tweet drew the attention of many Spurs fans, who made their views clear about the news.

What did Spurs fans make of the news about Kane?

“No Spurs fan would ever boo Harry Kane. Leaving or not. Not after everything he’s done for us. We applaud our legends. We’re not arsenal fans.“

“Stop it, you’re only making this harder for when he goes.”
Credit: @charlesville97
“This is painful.”
Credit: @inaias111
“MA’AM I’M SOBBING.”

The season hasn’t been a great one for Spurs, who find themselves at the sixth spot and are quite a way off the Champions League spots. Jose Mourinho was sacked and they lost in the League Cup final and all of this months after they had found themselves at the top early on in the campaign.

The season unfolded quickly for the club and to lose Kane in the summer would certainly leave fans even more frustrated than they already are.

In other news: ‘The club is a mess’ – Many Spurs fans fume as ‘shambles’ news emerges ahead of AVFC clash