Many Tottenham fans have been talking about the news update involving Lucas Moura that emerged on social media.

Journalist Alasdair Gold has recently reported about Moura’s situation, saying that Spurs have already turned down “big money advances” from clubs for the Brazilian and another offer for the former Paris Saint-Germain man could prove attractive for them.

The money they earn from his sale could help them bring in a key player and he could prove to be a surprise departure from the North London club.

Should Spurs sell Moura in the summer? 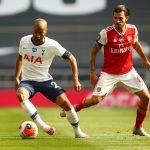 This comes after it was claimed that Jose Mourinho could look to target Moura and Erik Lamela at Roma in the summer transfer window.

The news about the ex-PSG man was relayed on Twitter by @TheSpursExpress, where many Spurs fans made their views clear about this.

What did Spurs fans make of the news about Moura?

“If Lucas goes before Winks Dier and Lamela we riot.“

“It would be a shame, Lucas should start or be one of the first subs on.

@LucasMoura7. It’s what’s behind that is the problem.“

“I don’t understand why we are considering offers for Lucas who contributes in a unique way, while players like Lamela, Sissoko, Alli and Winks who offer absolutely nothing are still at the club?“

“He is a really good impact player and has played better than most this season. Crazy that we keep some players, yet sell others.“

“Why would you turn down “big money” for a player who has never been a regular starter. Nonsense.“

His goalscoring contributions aren’t exceptional and he’s 28 now. So if Spurs can sign a player who offers more goals and assists and is younger than Moura, moving the Brazilian on may not be a bad idea.

In other news: ‘I can’t believe this’, ‘Scenes’ – Lots of Spurs fans flock to Alasdair Gold’s big update