Many Tottenham Hotspur fans have been discussing the club’s links with a move for Borussia Dortmund boss Edin Terzic.

German outlet BILD have stated that Spurs are considering Terzic as an option and the club believe that the Dortmund boss could be the ideal candidate for the post.

The 38-year-old is set to remain in charge of Dortmund till the end of June, after which he’ll go back to being the club’s assistant manager under next manager Marco Rose. Terzic also has some experience of the Premier League, as during Slaven Bilic’s time at West Ham, he was the Hammers’ assistant boss for over two years. 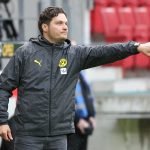 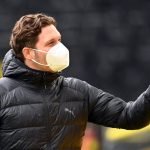 This update was relayed on Twitter by @LastWordOnSpurs where many Tottenham fans made their views clear about the German.

What did Spurs fans make of the news about Terzic?

“I actually wouldn’t mind Terzic coming in to rebuild if Kane leaves, he’s got Dortmund playing some fluid attacking football.”

“He’s emotional, such a good reason to get him in.”

“Rangnick sporting director plus this guy and let’s go.”

“I would take this. Just won a cup Aswell and done very well with Dortmund and has them playing lovely ball.”
Credit: @nickmascii
“I’m sorry I would absolutely love this.”

During his stint at Dortmund, Terzic has picked up 20 wins in his 32 matches in charge, which is pretty impressive. It has also been stated that Terzic relies on a playing style which is full throttle and attacking.

Considering that Spurs are reportedly looking for a manager who is young and professes an attacking brand of football, the Dortmund boss could be a good option for the club.

In other news: ‘I can’t believe this’, ‘Scenes’ – Lots of Spurs fans flock to Alasdair Gold’s big update