Many Tottenham fans have been talking about a transfer rumour involving Abdul Mumin.

The Sun have recently reported that Spurs are in the race to sign Ghanaian defender Abdul Mumin from Portuguese side Vitoria. The 22-year-old is said to cost around £15million and he joined his current club from Danish side Nordsjaelland last season itself. 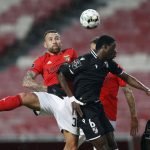 The likes of Aston Villa and Newcastle are also interested in him and Celtic have previously looked at the defender too. Mumin has been described as someone who is quick and dominant in the air and he has done well technically too.

This news update was relayed on Twitter by TranSpurs. Many Tottenham fans made their views clear about these links.

What did Spurs fans make of the links with Mumin?

“This is my worry with any “transfer rumour” linked with us right now. We have no manager so we shouldn’t have any targets as there isn’t a manager to choose one. If we are, then it reaffirms our worse suspicions that Levy and Hitchen identify the players and not the coach.“
Credit: @Quilo
“We have no standards.”

Mumin has been a regular in Liga NOS this season, playing 23 times in the league and playing once in the cup too.

Having said that, he’s picked up a rather underwhelming rating in the campaign, which isn’t a promising sign for potential suitors. So even though he’s acquired the experience of playing regularly across various leagues, the current campaign hasn’t been great.

Because of that, Spurs should be cautious about signing the 22-year-old Ghanaian and perhaps, they should look at other reliable options.