Many Newcastle United fans have been talking about the club’s links with a move to sign Gennaro Gattuso.

Italian outlet Calciomercato have recently talked about Newcastle’s interest in hiring the ex-Milan midfielder and manager, with the report claiming that interest from the club has emerged in the last few hours.

The report also links Wolves with a move for the Italian and a lot of it is down to their trust for Gattuso’s intermediary – Jorge Mendes.

Do you think Gattuso is an option for NUFC? 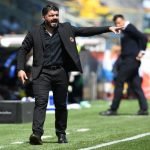 A tweet about Newcastle’s interest in the Napoli boss was relayed on Twitter by NUFC 360. Many Toon fans made their views clear about this news.

What did NUFC fans make of the news about Gattuso?

“I would accept this. Tough player and now a tough manager. He loved it over here when playing and believe his wife is from Glasgow so should be no problem him living over here.”

“Love to see that. He’d smash Charnley and Barnes to bits if he didn’t get his way. Ashley wouldn’t be within a mile of a deal for him.“

“I wish this was true! Our team would be scared to walk into the dressing room at half time of our games incase they get their heads kicked in.”

Gattuso’s Partenopei side are currently in the race for the top four in Serie A. They find themselves fifth in the table, but they are only two points behind second-placed Atalanta.

The report linking Gattuso to Newcastle suggests that the Magpies are one of the clubs who are looking to change their coach soon.

“Gattuso linked to us? He’s got a better record than I thought 44-11-12 at Napoli. Can you imagine him in a dressing room with our pathetic midfield, he’d ship them instantly, so I’m in.“

A lot of these Newcastle seem in favour of the idea of having Gattuso as their manager and they’re making their views clear about it.

Gattuso has managed two renowned clubs like Milan and Napoli, which perhaps showcases his quality. And considering the Partenopei’s league position, the Italian is doing a decent job at the Stadio Diego Armando Maradona.
Having said that, Newcastle would have to fend off competition from Fiorentina since the La Viola are also looking to sign Gattuso. So if the Magpies really want Gattuso, they’d have to move for him as soon as possible.
In other news: ‘Nooooo’, ‘Season ticket sales just nosedived’ – Many NUFC fans fume over ‘depressing statement’