A lot of Newcastle United fans have taken to Twitter to vent their frustration at Jonjo Shelvey for his performance in their 2-0 defeat against Arsenal on Sunday.

Steve Bruce’s side’s four-game unbeaten run came to an end on the weekend as they fell to Mikel Arteta’s Gunners in a comfortable 2-0 win for the London side.

Do you think Shelvey should start for Newcastle?

No, he needs to be dropped 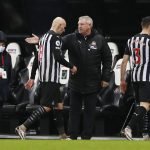 One player which received specific criticism from the Toon Army was the £70k-per-week Shelvey who was given a 5.9 rating by WhoScored.

The 29-year-old has been a regular feature in the Newcastle team this season having racked up 26 appearances in the Premier League alone (via Transfermarkt).

However, it was apparent Shelvey’s display did not impress many Newcastle fans as they vented their anger on Twitter.

“It wasn’t the worst performance but it certainly wasn’t far away. Jonjo Shelvey is horrendous. The referee should be looked at too. His performance was abysmal. All for Arsenal. Not that we deserved anything anyway.”

@Redmond15221340
“What does Shelvey do? Absolute clown #NUFC“
@seaned75
“Main problem was the centre of the pitch, we lacked energy and drive, played with 10 men playing with Shelvey”
@Cosseycj
“Shelvey doesn’t deserve the captain armband . . There’s nothing from him at all …no fight as a captain at all. Pathetic. Get shot of him end of .”
@OrmaMicky
“Embarrassing performance mate. I’m so fed up with Shelvey trying all these long aerial passes that end up giving away possession “
@JamieMelvilleTV
“Bruce can take shelvey with him”
@ChrisDavison8
“Shelvey yet again what a waste of space he is Does absolutely nothing”
@KierenW6
In his 26 league appearances, the English midfielder has netted just once and provided two assists but has played every single minute of the last 17 league games (via Transfermarkt).

Having come into the game without defeat in their last four, it is apparent these Newcastle fans felt let down by the display of Jonjo Shelvey as the Tynesiders missed out on the opportunity to pull 12 points clear of 18th-placed Fulham.

In other news: ‘Give a lot of credit to’ – Sky Sports man heaps praise on NUFC figure key to recent form