Journalist Mark Ogden has talked about the possibility of Harry Kane or Cristiano Ronaldo joining Manchester United this summer.

Ogden appeared on the latest video on the ESPN FC Youtube channel and he was asked about whether Ronaldo or Kane are likely to join United this summer.

The journalist stated that while none of them are particularly likely to end up at Old Trafford in the summer, Ronaldo moving to United is more likely of the two.

Who is likelier to join United this summer? 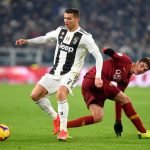 United have reportedly been in touch with Kane’s representatives, as the Englishman has stated that he would want to leave Tottenham in the summer.

It has also been reported that United would be open to re-signing Ronaldo in the summer, but they’d like to sign him on their own terms.

Ogden talked about the duo’s likelihood of ending up on the red side of Manchester and said (1:02): “I don’t think either are particularly likely but I think the most likely out of those two is Cristiano Ronaldo.”

TIF Thoughts on Ronaldo or Kane to United…

While United have been linked with a move for both the players and both Kane and Ronaldo have been in great goalscoring form, Edinson Cavani is set to stay at Old Trafford for another season as he’s signed a new deal at the club.

So with that in mind, Ole Gunnar Solskjaer’s men will have two out-and-out striker options and Mason Greenwood and Marcus Rashford can also play upfront. Because of that, signing another striker in the summer will not make sense for United.