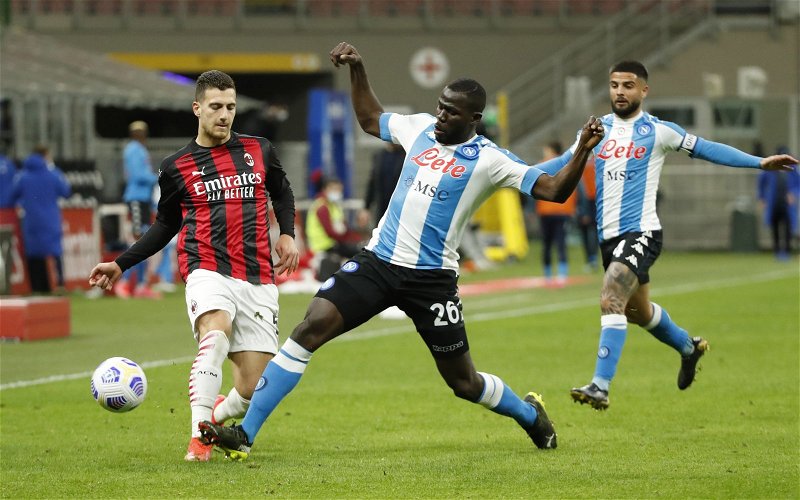 Ian McGarry has been speaking on the latest edition of The Transfer Window podcast about Kalidou Koulibaly’s future amid strong links with a move to Manchester United.

The 29-year-old is widely considered to be one of the best centre-backs in the world and was the subject of interest from Manchester United and Liverpool last year (according to Gazetta dello Sport, per Daily Express), and now it looks like Napoli are willing to sell the Senegal international on a cut-price deal.

McGarry said: (1:55) “We have been told by an agent who is very close to Napoli that Aurelio de Laurentiis, the chairman and president of Napoli, is willing to take a knockdown price for the defender.

“He was available for €90m in last summer’s transfer window.

“We understand that a fee of around €60m potentially even as little as €45m would be enough to secure his services.

“Now, we know that Manchester United are interested and also Liverpool, although, Liverpool have cooled their interest somewhat.

“From that same source, we’re told that Ole Gunnar Solskjaer would like a dependable partner for Harry Maguire, someone that he can play with week in week out so that they can form a partnership that makes Manchester United more secure at the back.”

Do you think Koulibaly will be available on a cut-price deal?

No, he won't be this cheap

Now, if Koulibaly were to be available for €45m (£38.79m), that could be a huge bargain for the Red Devils and partnering him with Harry Maguire could help improve Manchester United’s defence.

In 36 league games, the Red Devils have conceded 42 goals, which is 13 more than Manchester City, and you could argue that if they had a similar defensive record, they would be closer to City.

So, it will be interesting to see what happens in the summer, but if what McGarry says is true, Koulibaly could be a pretty cheap option for the Red Devils.