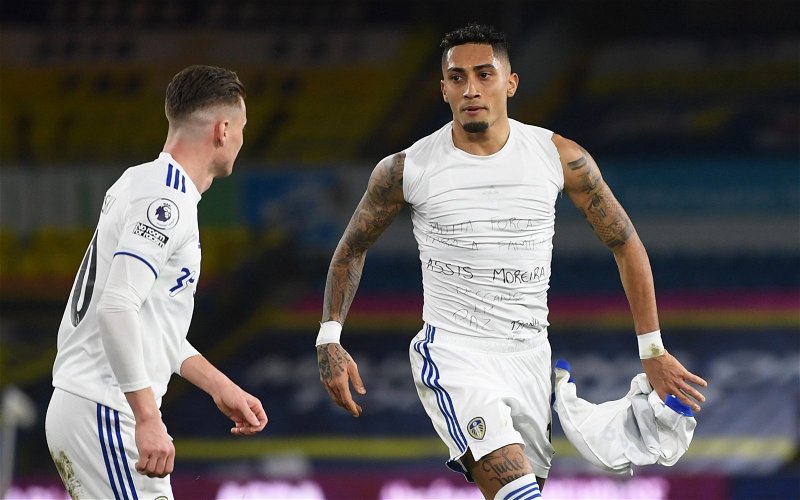 Leeds United fans on Twitter have been sharing their praise for Whites winger Raphinha and his latest performance for the Yorkshire club during their recent 2-0 victory against Southampton in the Premier League.

Goals from Patrick Bamford and Tyler Roberts secured the three points at St. Mary’s for Marcelo Bielsa’s side to guarantee their place in the top half of the league table when the season draws to a close.

During the game, lots of Leeds supporters were full of praise for Raphinha’s performance against the Saints in particular, with many taking to Twitter to share their thoughts and feelings on the matter.

So, what did these Leeds fans have to say about Raphinha and his performance against Southampton?

“Raphinha is so good”

“Raphinha MOTM for me. Total class. Pity he didn’t get his goal he deserved one at least. Top man.”

“Raphinha is going to be on another level next season a proper preseason with Bielsa. It’s quite frightening how good he’s going to be”

“Top half finish in our 1st season back after 16 years, take that all day long! It’s been a great season and I can only see it getting better! What a signing Raphinha has been, unreal!”

Looking at these tweets from this group of Leeds fans, it appears that they were over the moon with what they saw on the pitch from Raphinha during the win against Southampton.

Do you think Raphinha was Leeds' best player against Southampton?

Given how the Yorkshire Evening Post gave Raphinha a match rating of 7/10 for his performance against Southampton saying that he “showed how dangerous he is on the break,” it’s understandable why these Leeds fans were wowed by him.

With the 24-year-old managing to score six goals and provide eight assists during his debut season with the Yorkshire club, it would be great for the winger to grab a final goal or assist for Leeds this season during their final match of the campaign against West Bromwich Albion in front of the attending fans at Elland Road to top off what would be a solid first season in England for the Brazilian.

In other news: ‘Could have something to it’ – Pundit hints Leeds could revisit potential huge transfer