Chris Beesley, a reporter for the Liverpool Echo, has been speaking on the latest edition of the Royal Blue podcast about all things relating to Everton.

One of the topics that he spent some time on while talking about the Toffees was Michael Keane and his England chances.

The 28-year-old had missed the previous two games for Everton, but he returned to the starting XI against West Ham United and helped his side to a 1-0 win and earned himself an 8/10 rating from the Liverpool Echo.

Certainly, Beesley is a fan and thinks that he could be in England’s squad for Euro 2020 this summer.

He said: (19:56) “I’m a big fan of Michael Keane. You know what you’re [going to] get with Michael Keane. Don’t ask him to do something out of the ordinary, but when it comes to those core attributes of the centre-back.

“He was dominant, and obviously, it was interesting that the England assistant manager [Steve Holland] was in attendance yesterday [Sunday].

“If between now and the end of the season, he can have a sequence of games and continue that [type of form] maybe [he] will be back in contention for Gareth Southgate’s plans this summer.”

Do you think Keane deserves an England recall?

No, he needs to do more

Yes, he has done enough 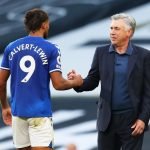 The former Burnley man has 12 caps for England but hasn’t played for his country since November 2020.

However, this was an impressive performance against the Hammers, and if he can follow it up in the last four matches, then maybe Gareth Southgate will bring him back into the fold.

Ultimately, if Keane gets in the England squad, that is good news for Everton as it probably means he has played well for the Toffees and helped them get results as they look to secure European football for next season.

In other news: ‘I know there’s been talk’ – Journalist drops claim on £6.3m-rated Everton ace’s future