Ian McGarry has been speaking on the latest edition of The Transfer Window podcast about Crystal Palace’s search for a new manager after it was announced Roy Hodgson would leave the club at the end of the season.

Hodgson has done a solid job with the Eagles and has kept them in the Premier League every season since he was appointed, but it seems the south Londoners will now be tasked with finding his replacement this summer.

One name who has been linked with replacing Hodgson is Sean Dyche, who is unhappy at Burnley, according to Duncan Castles.

He said: “Sean Dyche is an interesting one because Dyche is unhappy at Burnley; there’s been a change of ownership, there are question marks over the amount of money that will be made available to invest in the team.

“He’s kind of Roy Hodgson in ginger with a broader waist; the style of football is not the one that would fit with that Steve Parish model of playing a more attractive game.

“Dyche uses more younger players. So you might be able to take advantage of the recruitment system there, but it’s not a massive evolution.”

Do you want Dyche as the next Palace manager?

No, he is not what we need 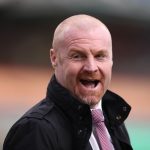 Yes, he would be ideal

Under Dyche, Burnley have also consistently staved off relegation; however, his style of football is arguably similar to Hodgson’s, and if the Eagles want to become more expansive, then he may not be the man.

We are not convinced Palace fans would be too keen if Dyche came in, but if Palace want a manager who can keep them in the Premier League and not push on, then we can see Dyche taking over at Selhurst Park.

In other news: ‘My understanding is’ – Journalist reveals big Crystal Palace managerial update