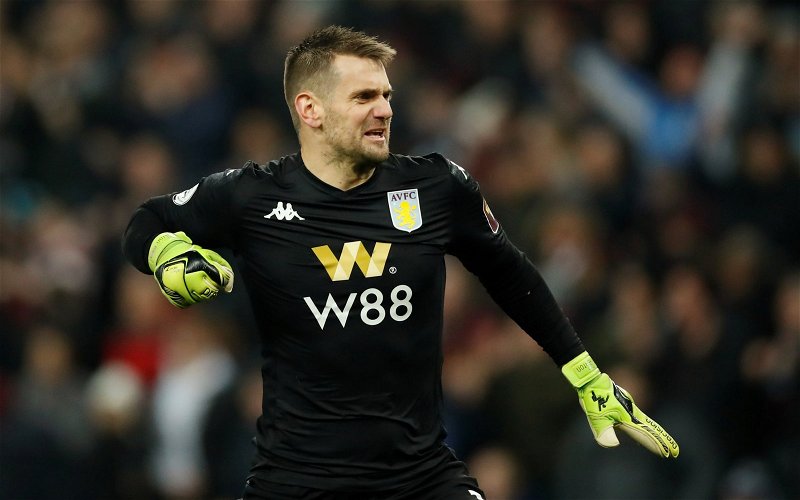 Aston Villa journalist Ashley Preece has been sharing his thoughts on Villa goalkeeper Tom Heaton and his future at the Midlands club.

This comes after Preece made an appearance on a recent Q&A edition of the Birmingham Mail’s Claret & Blue podcast where he answered a range of questions concerning Dean Smith’s side.

On the subject of Heaton, who has been recently linked with a move to Manchester United, Preece had this to say about the shot-stopper and his future. (2.16)

He said: “I thought he was brilliant when he first come in. Ruptured his knee ligament and it’s been a long way back since and Emi Martinez has been the signing of the season for me, not just for Villa but in the Premier League perhaps, he’s been absolutely outstanding.

“It’d be a sad way to end his Villa career with that United move looking at real possibility now so good luck to him if he does decide to go. I’ve been told Villa do want to keep him, Villa have offered him a new contract but with first-team chances limited, I think he’s going to move on to pastures new.”

Villa signed Heaton back in the 2019 summer transfer window from fellow Premier League side Burnley for a fee of £7.92 million.

Overall, the 35-year-old, who is currently valued at £1.62 million, has only made 20 appearances for the Midlands club as he suffered a serious knee injury back in January 2020 as Preece mentioned in the podcast.

Given how Emiliano Martinez has played every minute of Premier League action so far this season, prior to Villa’s league clash against Everton, and earned himself a solid season rating of 6.97/10, it would be safe to assume that first-team action would not be guaranteed for Heaton next season if he stays at Villa Park.

Would you be disappointed if Tom Heaton left Villa this summer?

However, if Heaton wants to be a first-choice goalkeeper elsewhere, perhaps a move to the Manchester club wouldn’t be the best option for him due to Dean Henderson’s emergence as United’s number one goalkeeper this season.

In other news: ‘To be honest’ – Journalist drops potential Grealish return date at Aston Villa