Arsenal journalist Charles Watts thinks that the club will move on from Mattéo Guendouzi in the summer.

The French midfielder, valued at £18m on Transfermarkt, has spent this season out on loan with German side Hertha Berlin, where he managed to score two goals and chip in with three assists along the way. Before that, he was something of a regular at the Emirates Stadium before a disagreement with Gunners boss Mikel Arteta saw him exiled from the team.

Guendouzi’s contract is set to expire in the summer of 2022, meaning that this window is one of the last opportunities that the club will have to sell him on before clubs can start thinking about signing him on a free transfer.

And speaking during a Q&A session on his channel, Watts felt that it looked inevitable that he would leave this summer, and that Arsenal should take any offer that they can for him:

“I think Guendouzi is going to be one of the players sold. We’re going to see a lot of Arsenal players head out the door this summer and I think Guendouzi will certainly be on that list, I’d be very very surprised [if he were to stay].

“I don’t see him coming back and featuring in Arteta’s plans, he’s only got a year left on his contract. I think if Arsenal can get any sort of deal done for Guendouzi, then he will be heading out the door.”

Does Matteo Guendouzi have a future at Arsenal? 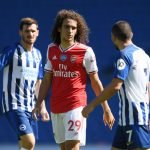 Considering the situation that surrounds him and Arteta, you do feel that it is highly likely that Guendouzi will be one of the names leaving the club this summer, the only question now is going to be how much can they realistically get for him.

With the animosity that appears to exist between him and Arteta, given that he is not exactly a prized asset of the team that clubs are going to offer a high value for, suitors are arguably more likely to try and lowball them all the way through the negotiations.

Hopefully, they can at least get a fair price in order to properly fund the summer overhaul that they have planned.

In other news: ‘From what we know’ – Reliable journalist reveals Arsenal would sign star pending one condition