West Bromwich Albion journalist and podcaster Chris Lepkowski has been sharing his thoughts on Baggies manager Sam Allardyce and his future with the Midlands club.

This comes after Lepkowski co-hosted a recent episode of West Brom-themed podcast The Liquidator where he spoke about a range of topics concerning the Baggies.

On the subject of Allardyce and his future in charge of the club, who em odds tips to leave, Lepkowski had this to say on the matter. (38.59)

He said: “With the way the whole week has unfolded regarding Allardyce, and I’ve got no particular insight here, other than to say it looks increasingly more likely that Allardyce might well stay.

The way that he’s taken an involvement in the youth team game, he’s obviously made changes to the team against Liverpool, there seems to be an investment from him, beyond the end of the season, I might be barking up the wrong tree and the very fact that [there] still hasn’t been an announcement on his future suggests that there are still discussions taking place.

“My thoughts on that might be that, should he stay, I suspect it will come with a new contract of some sort, maybe an extra year, maybe even extra two years, I don’t know, but sure as hell he’s not going to stay on for the remainder of one year, I wouldn’t have thought because there’s no value in him doing that or for the club to do that.

“So, there would have to be some kind of discussions over a new deal. I just reckon that might be where the club are, I might be wrong with that, but that’s the hunch that I’m getting at the moment.”

The former England manager was appointed as West Brom’s manager on an 18-month deal back in December after previous Baggies boss Slaven Bilic was sacked due to a disappointing run of results at the start of their current Premier League campaign.

Given how Allardyce failed to keep West Brom in the Premier League for next season and has only managed to win four out of the 24 league games he’s had in charge of the team, it’s understandable why there is some uncertainty about his future at the club and whether or not he will be the man to lead them next season.

Do you think Allardyce will be in charge of West Brom next season? 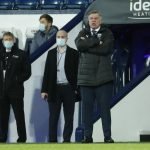 In our view, given the time he’s been at the club now and the experience and relationships he’s made with the players, Allardyce should put to bed any speculation about his future and continue with the Baggies so he could be the one to potentially get the side back in the Premier League.