Former West Brom midfielder Carlton Palmer has told This Is Futbol in an exclusive interview that Slavisa Jokanovic could get the Baggies promoted.

Despite recently having talks with the West Brom board, Sam Allardyce’s future is still up in the air, with the 66-year-old telling reporters a final decision on whether he will remain at the club or not will be made before 23rd May.

As most would expect, West Brom already have a shortlist of potential successors for Allardyce in case there is a divorce at the end of the season, and Palmer believes Jokanovic, 52, is a name that would be worthy of that shortlist.

How much is Pereira worth? 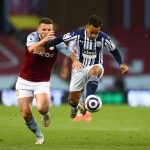 When asked by TIF if the former Fulham boss was the sort of individual his old side should be looking at, the ex-England international said:

Jokanovic is said to have held talks with Sheffield United over their vacant manager role, so he may not be a viable option by the time Allardyce has made his decision.

But if he is, with his promotion record, the Serbian is certainly someone worth considering.